Guest Post by Lynn Rush, author of Wasteland!! Welcome Her... 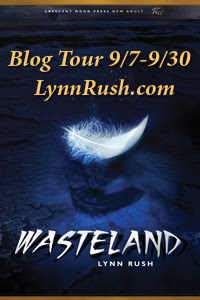 Short Bio:
Lynn Rush began her writing career in 2008. She has both an undergraduate and graduate degree in the mental health field and has enjoyed applying that unique knowledge to developing unique characters.
A former inline speed skater and mountain biker, Lynn has been known to test the limits of her athletic endurance. So, when she's not writing, she spends time enjoying the Arizona sunshine by road biking nearly 100 miles per week with her husband of fifteen years and going on jogs with her loveable Shetland Sheep dogs.
Catch the Rush: www.lynnrush.com
Facebook: www.facebook.com/LynnRushWrites
Twitter: www.twitter.com/LynnRush
Goodreads: http://bit.ly/k6NAZa
Amazon:  http://amzn.to/pavzwE
Barnes and Noble: http://bit.ly/pbigOg
All Romance Ebooks: http://bit.ly/nujjjp
You Tube Trailer:  http://youtu.be/k-KRE1yMiNk

Hey, everyone. I’m super excited to be here today! The Wasteland Blog Tour has been so much fun. I’ve got to meet tons of people and have found lots of blogs I’ve added to my list to follow.
Throughout the tour so far, the most asked question I’ve found was about my characters. How did I come up with them, specifically David? He’s the main character, and Wasteland is written in first person from a male point of view and that male is a half-demon…
Some people found that intriguing.
I’ve never really thought about it. It’s just how I roll. I write what comes to me. And strangely enough, a four hundred year old, male, half-demon came to mind one day in early December 2009.
But I’m a chick, how can I write a male point of view. And in first person!
Yeah, well, I guess we’ll be able to tell if I can by the sales, huh? No, but seriously, I had to pull on my resources for sure. Talking with guys, studying guys’ reactions to things, drawing from my psychology degrees…lots of resources out there for research.
David was fun to write because he’s mean. Kinda grumpy (who wouldn’t be after 250 years in solitary, huh?) And, he’s a killer. Can’t exist for over four centuries without having killed a few people, right. Plus, he runs souls for the devil, and that tends to get messy.
~~~~
So tell me, what questions do you have? Leave one in the comments below, and you’ll be entered into a drawing for a signed copy of Wasteland! If the winner doesn’t reside in the US, I’ll send an electronic copy of the book in its place.
I’ll check back and answer your questions…and you never know, David might show up too, so feel free to leave him a question as well! I’ll have William draw a winner some time tomorrow and then we’ll be in touch!
~~~~~

Book Blurb:
Bound by the blood contract his human mother signed four centuries ago, half-demon, David Sadler, must obey his demonic Master’s order to capture fifteen-year-old Jessica Hanks. But as he learns more about her, he realizes she may be the key to freedom from his demonic enslavement.

The only obstacle—Jessica’s distractingly beautiful Guardian, Rebeka Abbott. He must not give in to their steamy chemistry, or he will lose his humanity. But fresh off a quarter millennia of sensory deprivation as punishment for not retrieving his last target, he may not be able to resist temptation long enough to save what’s left of his human soul.